On paper, the Col du Sanetsch has nothing special to offer. It sits in just another side valley of the beautiful Swiss canton of Valais. And unlike the more famous Grimsel, Furka, Nufenen and Grand Saint-Bernard passes, it is a dead end. Every cyclist will agree: an out and back ride doesn’t look good on Strava.

And for that same reason, the pass has never featured in any of the pro races that visit the region: the Tour de Suisse, the Tour de Romandie and, from time to time, the Tour de France. No numbered switchbacks. No Dutch corner. No monument to Fausto Coppi.

Yet it is one of the most extraordinary climbs in the Alps. To climb the Sanetsch, the town of Martigny is an excellent starting point with 25 kilometres of flat ground on a quiet cycle path along the Rhône to get into the swing of things. However, you have to be careful not to get burnt too early because there is often a headwind. Especially if you leave in the morning, which is highly recommended.


The ascent of the Col du Sanetsch starts at 500 metres in the Rhone valley and winds first through the vineyards of the Valais, Switzerland's largest wine-growing canton. At an altitude of 900 metres, you enter the Morge valley. The road narrows and for the first time you feel as if you are in the mountains. The deciduous trees gradually give way to larch and fir trees.

When you get to the Restaurant de Tsanfleuron after 15 kilometres of ascent, you have already climbed 950 metres. It is the equivalent of many of the major passes of the Alps. However you  are still far from the summit: you begin to understand that the Sanetsch is a hell of a piece. Besides, the best is yet to come. So it is better to take a coffee break and fill up your bottles before continuing on your way because from there, you enter the high mountains. No more way to refuel up to the summit. A few bends later you reach the high pastures, surrounded by the high peaks of the Sanetschhorn and the Arpelistock. A few more bends and you enter a dark and damp tunnel of 800 metres through a rock face. Most of the time it is (dimly) lit, but it is strongly recommended to take headlights when climbing the Sanetsch.


The last two kilometres after the tunnel are endless, but you finally reach the summit at 2'252 m, near the Transfleuron glacier. Yes, that's more than 1'700 m of climbing. In 25 km. The Swiss equivalent of the famous Passo Stelvio, without the incessant flow of camper vans, cars and motorbikes around you. Not bad, eh? But there is one more surprise. Lake Sanetsch, 4 kilometres after the summit, marks the end of the road. Does that mean you have to turn back? No: you can hook your bike to a cable car and go down 1'000 m to Gsteig, near Gstaad in the canton of Bern. You then climb up to the Col du Pillon (1'546 m) and head towards Les Diablerets before returning to the Rhone valley at Aigle. From there, you have 28 km flat to reach Martigny.


Variant: In Les Diablerets, you can add the Col de la Croix (1'778m) before returning to the Rhone valley at Bex. The distance is the same and you climb about 500m more. 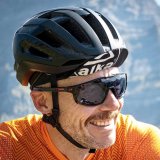 Martigny Region: the Petite Forclaz and the Emosson dam

73 km and 2900m of difference in altitude. Enough to satisfy the passionate climbers, who can stay in the region to tackle numerous climbs: Col du Lein, des Planches, du Sanetsch, de la Croix de Coeur... and many others.
Read More Colle Fauniera: a climb from another era

What was Carmine Castellano, then director of the Giro d'Italia, thinking when he took the peloton up - and down - the Colle Fauniera twice in 1999 and 2003?
Read More